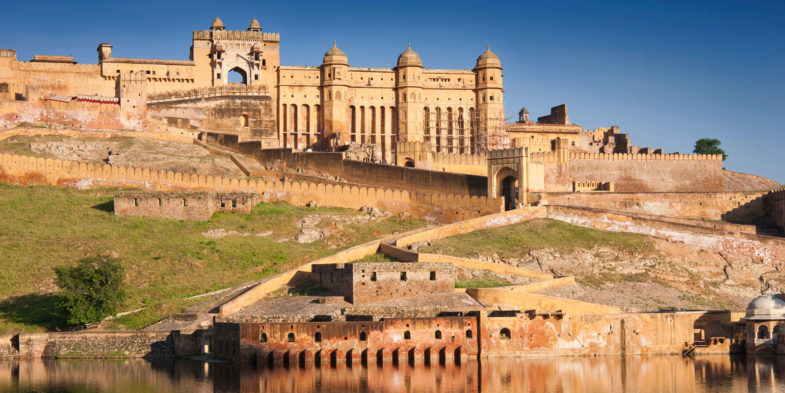 A romantic pink hue has defined this city since 1876, after being painted pink to receive Queen Victoria’s husband, Prince Albert.

The city of Jaipur is one of the architectural wonders of India. It houses some of the most ornate royal palaces in the country: elaborate structures designed hundreds of years ago that still captivate today’s visitors.

Built mostly in the 18th century by mandate of Maharaja Sawai Raja Jai ​​Singh II of the Rajputs caste, Jaipur is surrounded by a wall and several strong defenses. Conceived as a commercial pole in the Indian state of Rajasthan, it was considered ahead of its time due to the use of hypodermic or grid urban planning.

A romantic pink hue, which has defined the city since 1876, after being painted pink to receive Queen Victoria’s husband, Prince Albert, gives Jaipur the qualification of “Pink City”, as it is known commonly.

This architectural beauty is the first thing that attracted Hong Kong photographers Victor Cheng and Samantha Wong to the capital of Rajasthan.

Changing skyscrapers for centuries-old royal palaces and historic fortresses, the couple, who has 130,000 Instagram followers, explained that the images they captured in Jaipur received an unprecedented response on social media.

“The response has been incredible, almost crazy,” Cheng said. “Many of our followers had not seen this side of India, so we are glad we were able to show that side of the country.”

For photographers, one of the most intriguing features of the city is the pastel pink color of its buildings.

“The first doors you see when you enter are pink,” Wong said. “Once you pass, everything around you varies in different shades, from bright pink to reddish brown.”

A pink palace was especially popular on social networks, receiving hundreds of comments within a few days of being published: the historic Hawa Mahal.

The building is an extension of the City Palace, and its windows allowed real women to observe life on the street without appearing in public. One of Cheng’s most striking photos shows the building’s facade and its hundreds of windows.

“It was not easy to take that picture. There was a cafe across the street with a rooftop, and we had to wait more than an hour for people to leave and take the perfect picture,” Cheng said.

The vibrant hue of the building also made Cheng take a different approach to editing. “I lowered my usual editing process because pink was so bright and saturated in reality,” he explained. “I wanted the photos to reflect the real color that I saw and preserve its tone.”

The formative buildings of the city were created in a Rajasthani architectural style, which combines the complex construction of Rajputs Hindu techniques with the striking symmetry of the Mughal design.

“Many of the buildings were designed to be very symmetrical, which from a photographer’s perspective works very well,” Cheng said.

Surrounded by elaborate symmetric structures, Cheng said it required little effort to produce his images. “It didn’t require a lot of work … because if I stopped in the middle, my camera could capture things perfectly. Buildings and color made it easy for us to take perfect pictures.”